Currently on at Spike Island, is Cally Spooner‘s Post Production.

It is an unusual show (on until the end of June), and essentially consists of two video pieces. You start at the end, with the credits rolling, in a near-empty, bright white space, and then move onto to the ‘main exhibition’ – a pitch black room with five projectors, for the grand event.

Although it deals with some incredibly interesting themes, for me, I found this a very hard exhibition to ‘get into’. For a piece of work dealing with the hidden process of production, it remains surprisingly closed, and inaccessible. Over the course of the two months, the editorial changes taking place are still unclear – but having said this, its a show that has split opinion, and interestingly, those from a performance background have found it particularly inspiring. 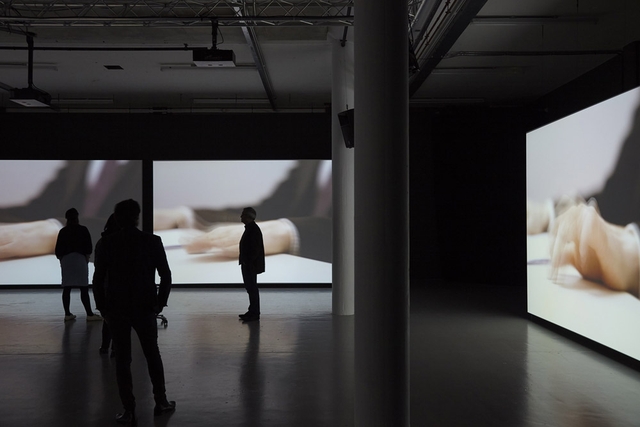 In this exhibition of opposites – the piece is titled Post Production. Rather than thinking of it in the traditional mode of the gallery exhibit however, Cally Spooner wanted to use Spike Island more as an active testing site, a place to show this almost complete film.

The finished version is due to be shown at a museum in Amsterdam in 2016, and there are still changes that will be made in the final edit. But this is the key thing about the show – it looks at the process of editorial cover up and authenticity; the polishing and fixing of live experience.  What the artist describes as the ‘making technical of the live’.

Cally Spooner is a British artist who lives and works in London, and her artwork often deals with theory and philosophy – mixed in with advertising, current affairs and theatre.

The reason for starting with the credits, is that the artist wanted to foreground the people and organisations who make work possible, who often remain hidden behind an almost mystical finished product. The noise playing through the headphones is a continuous ‘Oooooh’ sound, that never finishes – making the viewer anticipate something…. But that end finale never arrives. The credits just start all over again.

This non-arrival is important. It’s this process of marketing and production, leading the viewer to buy more into the mindset of whats happening, than any concrete product or experience.

This is all inspired by Cally Spooner’s own background – she studied history of art and used to work in a marketing agency, as well as several years working as a producer, often making pop videos – so she is very interested in the process of production, as well as the end result.

One of her main influences however, is the work of the French philosopher, Bernard Stiegler. He looks at language itself, and how it works as a kind of technical tool; a prosthetic that we use to enhance performance. As long as there have been humans, we have used tools to help us, in hunting, communication or everyday life – and it’s through such tools, that we’re able to understand other people and the world around us.

Stiegler’s best known work Technis and Time, argued that these technical aspects of our existence are gradually taking over people’s perception of the world around them.  Humanity is not merely the ‘subject’, with our technology as ‘object’ – but they are in fact more interlinked than we have previously given credit. It’s this notion that is so central to the current exhibition: thinking about forms of public performance, and how people attempt to aid their natural presentation. 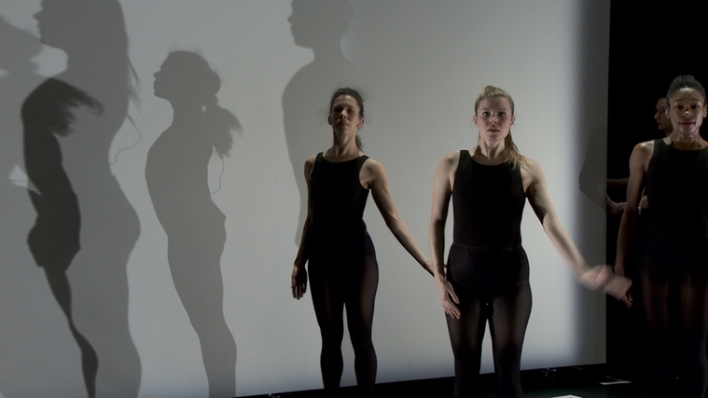 The main video piece is entitled And you were wonderful, On Stage. Working with a chorus line of eighteen female a-cappella singers, and collaborating with a composer named Peter Joslyn, Spooner uses the genre of Broadway musicals as a tool to think about live performance.

A lot of the words, which surround the viewer from all angles, come from celebrity mishaps (again, dealing with public performance and scripted reality), orchestrated confessions – Beyoncé’s lip-synching at Obama’s inauguration, or Lance Armstrong’s doping scandal, and the resultant staged apology on Oprah Winfrey. It is all looking at performance (whether literally on stage, or video, or in the realm of every-day life), and how this is enhanced.

The piece is filmed in one continual go, and is about forty minutes long, with the only editing coming in four cuts to ‘commercial breaks.’  In these breaks, you will see a picture of a man sitting at a table, speaking corporate jargon, and then another, altogether more convincing voice, showing him how it should be said. Again, it’s this concern with ‘high performance and sameness’ – the process of behind the scenes marketing and editorial changes that Spooner wants to look at, in which real people’s words and actions are tweaked.

Within the work though, the need for decision, editing and reduction is hinted at however, as there are five screens in total, accommodating six camera feeds. For me, it was this aspect that was the best part of the show – as the positioning of the screens makes it impossible to view the whole work at once – bringing it back towards the live, and real experience. It also forces the viewer (as opposed to the artist) to put their editorial cap on – and choose which aspects you’re going to view, and which aspects you are going to discard.

Different people will inevitably take (and discard) diverse things from the artwork (using it as a tool, if you will, to enhance their own understanding and performance). It is this part of the editorial, viewing and performance process – highlighted in the actions of the spectator, as opposed to the video itself, that I find most fascinating.

It is certainly worth a visit – and I would love to hear your thoughts on Cally Spooner’s work!

Cally Spooner’s Post Production is on at Spike Island until 21st June.