This Long Read blog is inspired in part by my current teaching on Germany in the inter-war years and partly as a self-admonition to visit the current Tate Modern exhibition on Weimar Germany!

Titled “Magic Realism” (and on until 14 July), this free show promises an encounter with the “uncanny and mysterious” through the art of the Weimar Republic. It includes the art of Otto Dix, George Grosz, Albert Birkle and Jeanne Mammen – all creating works in the context of growing political polarisation and ever-changing cultural norms. It has been great to see this fascinating era covered in many of the school curriculums I teach, but aside from brief discussions of the “New Woman” in Germany (often with a strong focus on government economic policies) – the significant contribution of avant-garde artists to these new conceptions of gender are often overlooked. As a prelude to considering the Tate’s portrayal of “magic realism” in Weimar, this blog will consider the extent to which discussions of gender informed this movement.

The world to which the avant-gardes of the early-twentieth century belonged was very much a patriarchal society. Despite this, the stability of male hegemony was threatened by the First World War and industrialist capitalist culture. Movements such as women’s suffrage and the role of the new Weimar female exacerbated such concerns. Having found new levels of independence both economically and socially, many women were unwilling to let this disappear. Perhaps no artistic movement exemplified these gendered debates better than the “Dada” art group.

A strong sense of disillusionment permeated the early-twentieth century and the European mindset, as the corruption and failure of rational enlightenment ideals were exposed in the bloodshed of World War One. Developed in reaction to this, “Dada” consisted of artists who rejected the logic of modern capitalist society, instead expressing nonsense, irrationality, and anti-bourgeois protest. Many scholars have argued that the events of the First World War traumatised European masculinity in particular. 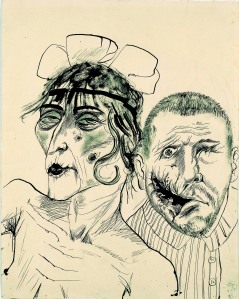 Otto Dix – Veteran and the Prostitute

Otto Dix – Louis and the Prostitute

The etchings of Otto Dix, a serving member of the German army and subsequent Dada member provide a pertinent illustration of his gendered representations of war. They reveal the seemingly inextricable link between gendered identity, militarism and patriarchal capitalism. The militarised males are dominated physically and emblematically by the swollen and grotesque bodies of the women. By playing on traditional stereotypes of prostitutes as morally and physically corrupt, the ‘loss of manliness’ becomes evident in the close parallels between the disabled war veteran and the diseased prostitute. The soldiers are not only subordinated to the prostitute but implicitly corrupted by the impurity of the transaction.

This perceived attack of “feminisation” goes some way to explain the marked rise in the appeal of the political right in the interwar period, as such concerns were counteracted by notions of the “new man” created in the “steel bath” of war.  Against this unsettling background, it is important to note that (unusually) Dada as an avant-garde movement lacked any overriding commitment to political theory or social reform. The only ideology which approached some level of consensus was the commitment to the irredeemable absurdity of reality and life itself. Many Dada-ists desired revolution, be that politically, culturally or artistically; whilst disbelieving the ability to achieve anything final. It was this commitment to flux and inherent opposition to a conventionally ordered world which was the real revolutionary factor. 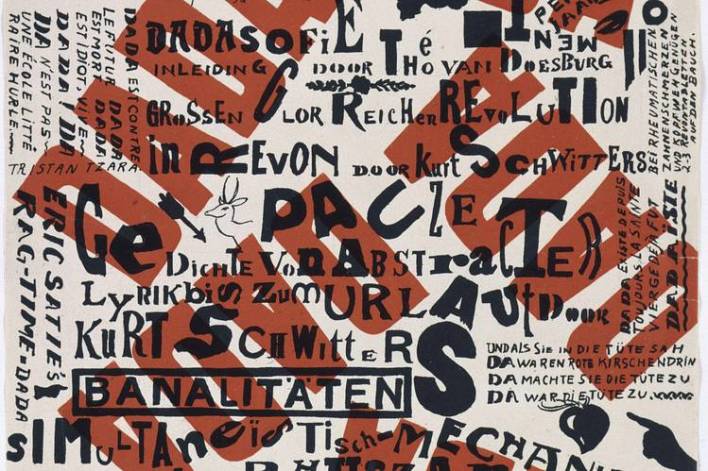 A short story by Kurt Schwitters titled “Revolution in Revon” (describing a man apparently functionless in an unexpected setting) provides an apt summary of Dada concerns. The unease and abstract sense of threat illuminates the problems of the inter-war period. The “irrationality of truth” gradually evolved as the new understanding of reality. With this in mind, it is difficult to speak coherently of the “Dada movement” as a whole – but it was one which placed anarchism, absurdity and cultural disillusionment at the centre of any ‘assumptions’ on gender and modern life.

Dada was distinct as an avant-garde because of the relatively high number of female participants; Emmy Hennings, Sophie Taeuber, Hannah Höch and Suzanne Duchamp to name a few. Yet these women were doubly displaced – not only having to fight for individuation in the increasingly industrialised and capitalised culture, but also within their own artistic circles. Whilst the male Dada-ists expounded the rhetoric of gender equality and humanity, these ideals were seldom practiced. To take Hannah Höch as an example; Hans Richter, the main chronicler of the Dada movement described Höch’s main contribution as the “sandwiches, beer and coffee she managed to somehow managed to conjure up despite the shortage of money”, whilst Höch’s lover Hausmann asked her to support him financially “because he as an artist shouldn’t have to waste time on such pecuniary affairs.” 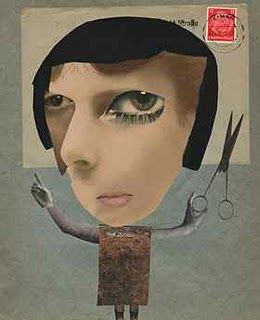 Höch, a key figure within Berlin Dada identified the lack of respect and hypocrisy of her male colleagues in works such as “Da-Dandy” of 1919. In it, the women are dressed so similarly they appear as one, becoming a voyeuristic titillating object formed ‘by’ (or ‘forming’ depending on interpretation!) the male profile. Such images can be read as an allegory of modern femininity, the boundaries of the self are depicted as a fractured construction of hegemonic male forces. Any reading of Hannah Höch’s artworks should not portray a one-sided diatribe of the victimised woman against the manipulating male however. There is anger and pleasure at the newly increased role of women within society; confusion itself being a very fitting Dada subject – a transitional state of experience. The reasoning which Höch did counter was the denial of gender politics as playing a significant role in Dada art. 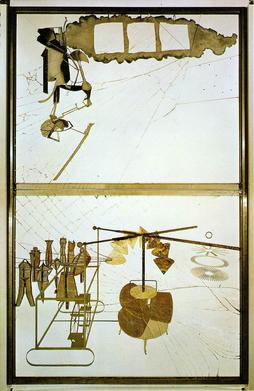 The saturation of gender roles in avant-garde ideology can be seen in the mechanomorphic constructions of artists such as Picabia, Duchamp, Hausmann and Man Ray. The rise of the sexually ambiguous new woman was mapped into the machine image. This represented the double threat of industrial ‘feminised’ capitalism to not only European masculinity, but also that of American patriarchy. Works such as Picabia’s “Young Girl in a Perpetual State of Nudity” and Duchamp’s “Large Glass, or The Bride Stripped Bare by Her Bachelors, Even” highlight beleaguered masculinity with the female body / machine as the new threatening force. Such artworks can all be positively read as an attempt to regain the human form from an increasingly alienating industrialism. This was attempt was described by Paul Haviland:

“Man made the machine in his own image. She has limbs which act; lungs which breath; a heart that beats; a nervous system through which she runs electricity…. She submits to his will but he must direct her activities….”

Whilst it may be true that the recovery of the human form was “essential for survival in man-made world”, the question remains as to why the machine took on an exclusively female form? For all Dada’s attacks on conventional morality, the feminised machine image represents nothing more than the gendered and regressive (masculine) re-assertion of control – over both the ascendant new woman and ‘the machine’. 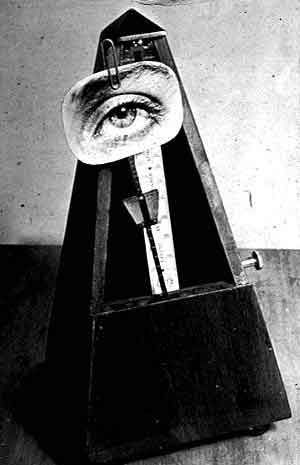 This point can be further elaborated with a Man Ray artwork “Indestructible Object / Object to be Destroyed”. A mechanised conductor sets the cadence for musical production, in effect a monitor of human arts. The female form is evoked through an eye (that of Man Ray’s former lover) returning the viewer’s gaze, aggressively persistent and autonomous, with the teeth of the metronome taking on menacing and castrating undertones. Such a work has been described by Linda Nochlin as a “brutalising transgression of gender boundaries”, part of the humanising barrage against the machine. I suggest however, that such a work fits neatly into notions of subjugation prevalent in early-twentieth century society. It presents the female gender still as fragmented and objectified, violently perpetuating her identity as an irrational force to be controlled. 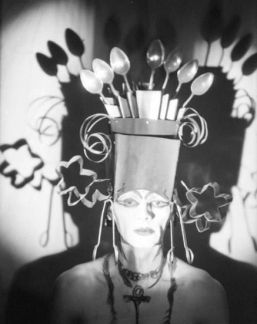 Assumptions about gender certainly informed Dada art to a prodigious extent – though perhaps these assumptions were not as pioneering as they may have first appeared. As a closing example, the life of “Baroness Elsa Von Freytag Loringhov” provides a pertinent illustration of threatened male privilege and the disappearance of a woman who subverted gender norms on the streets of New York. The Baroness performed her voracious sexuality on a daily basis. She created costumes consisting of found car lamps and teaspoons, flaunted her shaved head, and waved a plaster cast penis (a symbol of threatened masculinity) at all who passed. This was the crux of the “Dada ideal” – of art being identical with life. The Baronesses’ disruption of gender boundaries proved too subversive, and whilst many of her Dada colleagues went on to forge successful careers, she died in unknown poverty.

In the commotion of self-performance and the attempt to tear away the boundaries of life and art, conflicts between tradition and new subversions are unavoidable. For more on this illogical, surprising and often confusing movement – I’ll look forward to visiting Magic Realism soon and seeing some of these fabulous artworks “in the flesh”!