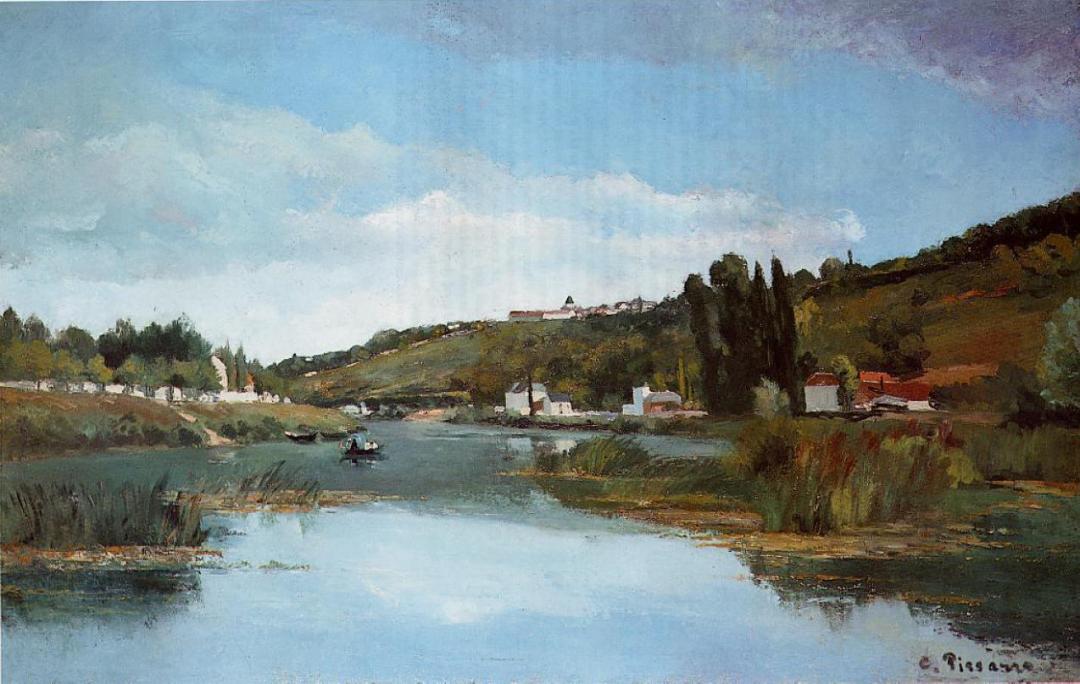 We’ve all heard of ‘the impressionists’; the stereotypical French (mostly male) painters, painting from life in rivers and in fields, fascinated by the universal themes of light, time, and perception…

But who exactly where they, and what did they do?

To provide an answer, I am focusing on one of the lesser-known impressionists, Camille Pissarro, and a masterful, though again under-appreciated work, The Marne at Chennevières.

So why the devil do you have the arrant awkwardness to paint solidly and study nature so honestly…you are a clumsy blunderer, Sir – you are an artist that I like.

In 1865 Pissarro had two paintings accepted to the Paris Salon; The Marne at Chennevières being one of them. The painting depicts a small town, nestled on both sides of the Marne River, just South East of Paris, near to the town of Varenne Saint Hilaire where Pissarro resided from 1863 to 1865.

Pissarro listed this work under the instruction of Melbye and Corot, and the influence of Corot can seen in the works clear fascination with the analysis of light and atmosphere, whilst rendering this analysis in terms of contrasting values of tone. Despite this influence, the vigorous handling, palette and superb control of the palette knife owe much more to the landscapes of Daubigny, the solid construction to Courbet and the minimal handling to Manet. This was a tight-knit group.

But of course, what artistic movement would be worthy of the name, if all its members followed the same, formulaic approach? This was certainly not the case with the impressionists. Think of Claude Monet, the ’cause célèbre’ of the group – his paintings characterise the approach; relatively small, thin, yet visible brush strokes, open composition, an emphasis light’s changing qualities, ordinary subject matter (think hay stacks, water lillies and pastoral scenes), inclusion of movement as a crucial element of human perception and experience, and unusual visual angles…. 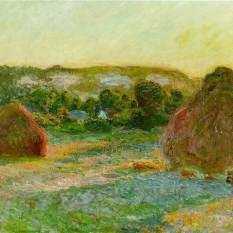 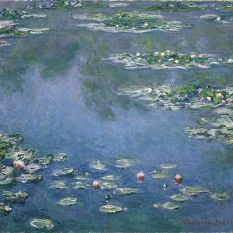 Does this appear in Pissarro’s work?

Yes and no. It must be emphasised, that although the many facets of Pissarro’s work can be identified and placed amongst his contemporary associates, the truly unique and outstanding aspect of works such as The Marne at Chennevières lies in Pissarro’s ability to assimilate this broad spectrum of interests and techniques – producing an altogether different, unassuming, and cohesive whole.

Coming to prominence in the 1870s and 1880s, the Impressionists faced harsh opposition from the conventional art community in France. Pissarro was clearly ahead of his time.  The undiluted brightness and unfinished surface were cause for consternation amongst the more conventionally orientated jury. Cezanne tells us that by 1865, the artist had already eradicated dark colours such as ‘black, bitumen and sienna from his palette’. However, this did not mean than Pissarro’s works were altogether light in tone. Although bright blues and greens have been used in the vast expanses of sky, land and water, they have been significantly dulled in places, and when viewed in its entirety the painting appears quite dreary and dark in its colouring.

This raises a fascinating dichotomy, how has the artist managed, through a dark and dampened mix of colours combined with heavily impasto handling, to depict a landscape which still achieves the overall impressionist–impression of a bright and breezy river scene? 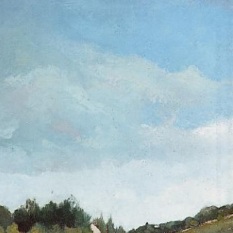 Seen close up, the handling is broad and patchy, especially  in the foreground of the work. At the bottom of the painting the umber undercoat is clearly exposed where the thicker layers of paint have been pulled across the surface of the canvas. However this differs entirely from the treatment of the sky, which has been dealt with in a more fastidious manner, the careful modulations of subtly blended colours are far more evenly applied than elsewhere in the work. The ephemeral and fleeting nature of the reflections of the sky in the water are directly contrasted with the dark, highly foreboding strip of land stretching across the painting.

Such a complex and differing mixture of handling and subject matter within the painting – the strong vertical firs, the lucidly floating clouds, and solid unyielding dwellings are all controlled within the strong, simple shapes of the composition as a whole.

The composition centres on the two banks of the river Marne, cutting diagonally across the picture plane and moving the viewer’s eye gradually into the receding depth. A sense of calm and equilibrium is built up by the use of repetition; not only of colour and tone, but also of form. The repetitions of horizontal and vertical lines dominate the spatial forms of the painting. The shapes proffered to the viewer are not built up by laborious and fastidious modelling; there are no exact outlines or minute detailing, but they are formed through contrasting shades of colour layered up against each other. 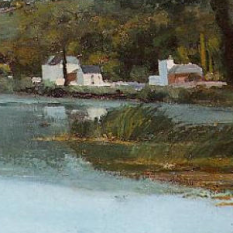 As identified by Zola, the artist’s ‘strong and convinced canvases, his grave and profound talent, his sturdy technique and his solidity and breadth of touch’ are what set Pissarro’s robust and durable mètier apart from the more showy and ultimately transient technique of his salon contemporaries. It is this simplicity which allows the overall impression of the serene yet solid landscape to make such a lasting impact.

Some critics appreciated Pissarro for his colour and light, whilst others such as Zola found the artist’s construction and formal arrangement the source of his ingenuity and brilliance. However, it is the latter qualities which are most exceptional within The Marne at Chennevières; the painting is solidly constructed, the small figures in the boat have only been created by a few strokes, and the windowless houses on closer investigation are constructed purely through thick block of colour. However, when the viewer moves a few paces back from the work itself, the marks which are highly visible up close disappear; the ‘perfect pitch’ of tones and colours coalesce into the landscape, showing the serenity and balance which are so characteristic of all of Pissarro’s works. 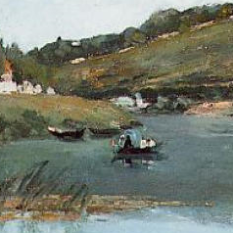 Pissarro has taken the sense of weight from painters such as Courbet, applying it with a delicacy and freshness that enables the artwork to reflect the aesthetic and textural qualities in perfect synchronisation with the artist’s inner vision on the one hand, and the reality of nature on the other. These qualities would become the very cornerstone of the impressionist movement.

The setting of this painting does fit in to a wider tradition of Parisian artists migrating to the countryside in order to paint what small aspects remained of the traditional, pastoral way of life. Pissarro held such characteristics as an extremely important part of his art and esteemed the way of life centred around the continuity of family and the land. He believed that a love of nature was a fundamental part of the anarchist philosophy, and that this in turn formulated his art; ‘I firmly believe that something of our ideas impregnated with the anarchist philosophy is reflected in our art’.

This viewpoint can be seen in the elements given emphasis within The Marne at Chennevières; the tiny figures in the boat are rendered insignificant amongst nature, and it is not the village which is the real focus of the work, but the vast expanse of sky, the rolling hills, reeds and river which grab the viewer’s attention.  Pissarro firmly believed in the necessity of landscape to his art, and as the artist himself stated; ‘we ask nothing better to be classical, but achieving this through our own sensations’.

Pissarro saw himself as a modern proponent of classical French tradition, based firmly around observation of nature. Yet as The Marne at Chennevières clearly shows, these aims are firmly mixed with the artists own creative vision.  In its solidity and awkwardness, Pissarro’s exertion somehow remains truthful to both his artistic vision and the outer reality before him; The Marne at Chennevières directly represents the experience of the artist labouring over the expressive handling and subtle modulations of colour in response to nature.

The act of painting and the scene represented are so inextricably linked that the two cannot be separated in any analysis. This after all, was the ultimate aim of the group.  Considered radicals in their time, the early Impressionists violated the rules of academic painting. They painted realistic scenes of modern life, and strove to depict the momentary and transient effects of sunlight by painting en plein air. For the entirety of the group; radicals, yet integrated; concerned with fleeting light, yet focused on the ‘overall effect’ – what better summation could there be, than this proto-impressionist work, The Marne at Chennevières.

‘Inventing Impressionism‘ is on at the National Gallery, London, until 31st May.