Let Me Tell You a Story Jack! – Storytelling in Bristol

An evening full of folklore, fun and festivities. 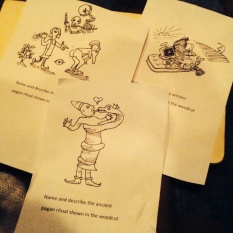 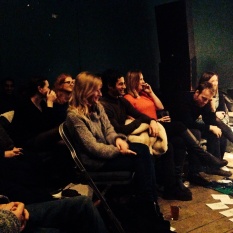 Earlier on in the week, I attended a story telling event, themed around ‘folklore and festivals’ at the Crofters Rights (Stokes Croft, Bristol). It was a thoroughly entertaining ­- and pleasantly unexpected evening.

The night is ran and compèred by Will and Shonette, who together ensured a relaxed and hospitable atmosphere for all the folkloric story-tellers.  Festivities started with a bang, with a song from Will – and after that, over two hours of short stories, funny stories, heartwarming stories, dark, devilish and truly disturbing stories, poems, anecdotes, comedy followed. I was struck by the bravery of all involved – prepared to share their work with a room full of (albeit incredibly welcoming) strangers ­­– and their bravery was very much appreciated.

The first half consisted of Tim (who had came straight from work, penning his tale in the two hour gap between this and the pub), but nonetheless gave a  fab futuristic re-working of a folkloric narrative – ‘the last day and the great feast of clan 17’. Following Tim was Angela, who despite (understandable!) nerves was a truly accomplished storyteller, and an even better writer, telling the tale of ‘Golden Days and Golden Nights’ in which a young man with a disabled mother got a ‘tangled up’ in a lot more than he bargained for.

Jimmy was next, providing the whole audience with a side-splitting and wonderfully told anecdote of his more memorable moments living with crohn’s disease. ‘The Big Accident in Bangkok’ is not likely to be forgotten anytime soon, by anyone treated to his rendition! Sven followed – also a comedian, and told a similar tale of Thai adventures. This time, the prelude was a drug-smuggling trip to Amsterdam (at the age of ten), his ‘Santa-Doesn’t-Exist’ moment, followed by wondering where it all went wrong, stone-cold sober, having carried his mother home. Both Jimmy and Sven were incredibly funny, and certainly got the audience onside.

So far, for me ‘Family’ should have been the third theme added to the night’s prompts. Tim’s tale spoke of a community on the very brink of survival, yet united in their celebrations. Angela’s told of a young man, utilising deceit and trickery (the tale of his mother) to gain the better of a meek and ordinary older woman – only to have his assumptions turned on their head. Jimmy’s anecdotes focused on the shock and horror (yet also sincere welcome) of his unsuspecting Thai family, and Sven told us all about his own mother. After all, where would ‘folk’ be without ‘family’?

We then had a brief interval, with Will greeting everyone after the break with another daring ditty – dressed in a silk kimono, traditional ‘story-telling hat’ and controversial calendar.

Christie told the first story; her rendition of ‘How to Live in a Lift’ – a tale of love (most often comically unrequited), loss – and of course, lifts.  Alex then took to the stage, with a story from his professional life, teaching children all about the stars via multiple renditions of ‘Twinkle, Twinkle.’ In an amusing reminiscence, the ending was surprisingly sentimental, with one young girl’s ‘wish upon a star.’  One of my favourites of the evening followed next, Tom, who was inspired by classic gothic horrors.  He told the story of ‘The Very Special Shell’, and his protagonist (a young boy’s) unfortunate curiosity – a curiosity which resulted in his ultimate demise. His story struck me as a great re-imagining of the fairy/folk-tale genre (think of the curiosity of Bluebeard’s wife, or Hansel and Gretel’s adventures in the forest), done in a ‘specially’ spine-tingling manner.

My favourite of the night had to be Andy however, who told a selection of prose poems – thoughtfully delivered, incredibly well-constructed and alternately amusing and heart-wrenching.  Some of the best included: the girl who got her heart pierced, the boy and the girl with strong imaginations, the streetlight who was given a lot of flowers, the soldier who could only get annoyed at small things, the man who talked to his horse, the protester who glued herself to the ground, and the musician – who recorded his own songs and ate them whole.  They all ended with the finality of THE END.

One of the last storytellers of the evening was a gentleman whose name I did not catch, (sorry! – does any one know?), with a truly gruesome and disturbing story about a train schedule planner with plans at world domination. There were some very eloquent, and very funny aspects to the story (the tear down a lady’s cheek ‘like the Sunday service to Dover’ or her soft, pliant skin, ‘malleable like a bank holiday timetable’) – though these positive aspects were overshadowed by the crude violence, which seemed out of place with the atmosphere of the evening.

I do hope that ‘Jack’ has many more stories to come… and I for one loved the diversity, imagination and bravery of all involved.

Did you attend a similar event, present your work – or plan to do so in future? I’d love to hear from you!

Here’s to beginnings, middles and ends!

4 thoughts on “Let Me Tell You a Story Jack! – Storytelling in Bristol”