What makes you, you?

This was the question I was left pondering, as I left Willem de Rooij’s photographic exhibition at the Arnolfini.

Willem de Rooij is a Dutch artist based in Amsterdam, and this latest exhibition – his first major show in a UK public gallery, consists of eighteen panels, each displaying a selection of photographs taken from newspapers.

So far, so simple.

It deals with the themes of Riots, Protest, Mourning and commemoration – As represented in newspapers, January 2000 – July 2002. De Rooij wishes to explore the processes of selection in the media; the ways in which people are presented in protest, and ‘how they choose to stage themselves in front of the camera.’  Indeed ‘how they choose to stage themselves’ is crucial here, as it allows for the agency of the ‘acted upon’ – looking at the people themselves, their interactions and motivations, over and above the society that ‘contains’ them.

This is a key centre of disagreement to highlight: how one can balance out the focus on actors and ideas, whilst still maintaining a sufficient focus on the structuring principles shaping peoples’ actions.  De Rooij states that without the headlines and descriptive text, his selected photographs enable the viewer to focus on the formal qualities of the photographs, ‘taking a closer look at the subject.’

But without the context, I would argue that the effect is exactly the opposite.  The subjects seem to loose their ‘subject-hood’, their ‘identity and individuality’, because they become merely part of a category – a two-dimensional image.  The image is then  ‘indexed’ around concepts such as anger, sadness , or unrest; the emotions shaping protest, or a more abstract, artistic category – light and shade, composition, colour, or even political views.  This was in response to an earlier work, that of  Aby Warburg and his ‘Mnemosyne Atlas’, who arranged his photographs around ‘coordinates of memory’ such as ‘astrology and mythology’ or ‘vehicles of tradition.’  With this approach to organisation though, the photographs, and the image represented in them, take precedence over the ‘person/subject’ presented within.

*Correction* – There was in fact a printed legend of the images in the gallery, listing the original captions as well as date, location and photographer; something I was not aware of at the time of writing this article.  Thus, the assertion that the individuals loose their ‘subject-hood’ as a result of this lack of contextualization is an unfair assessment.  I have left the article in its entirety however, as it remains my initial response to seeing the artwork.  Apologies. 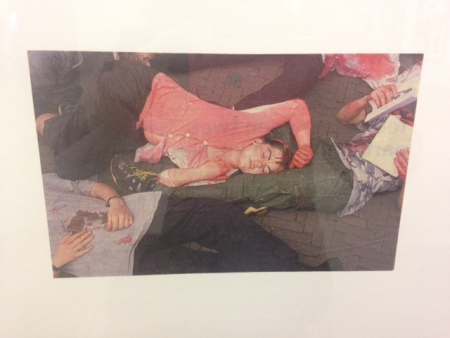 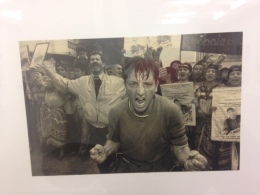 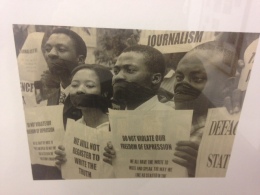 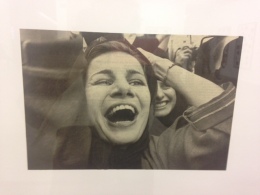 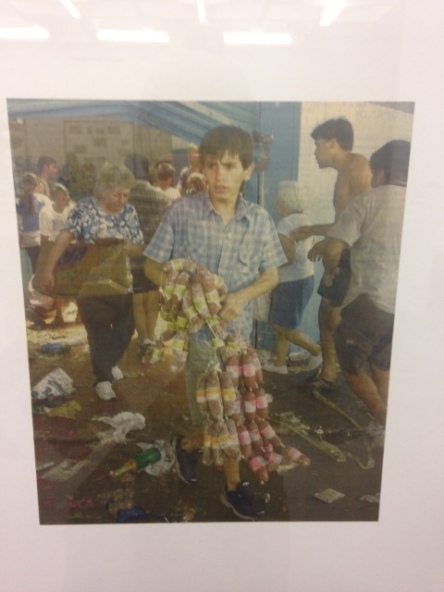 For Rooij, this was also the point – that it enabled him, as an artist, to ‘construct a new meaning’, but how does his imposition of meaning fit in with his simultaneous aim of looking at how people have chosen to stage themselves?  The two artistic endeavours seem to be diametrically opposed.

Alongside these photographs however (and this was the part I found most fascinating) was a single bouquet of flowers, placed in the right hand side of the room. Entitled ‘Bouquet V, 2010’ and consisting of 95 different flowers, this piece, when placed alongside the depictions of rioting and unrest ‘poetically symbolised a concept of diversity, and the tension between the individual and the collective.’  Each flower ‘occurs only once in the bouquet, avoiding a hierarchy of colour, species or type, and each individual flower remains visible within the whole.’  This tension between the individual and the collective, was the same tension the rioting pictures presented…. but what individuates a person in a crowd – how is identity assigned in the collective? 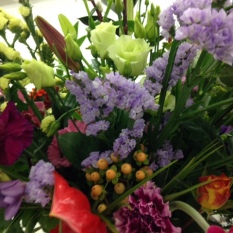 Each individual flower forms the bouquet, and the bouquet in turn, is the flowers’ raison d’être.  The same could be said for a population in protest, their choice to be there forms part of their identity, with each individual exercising this freedom.

So, is identity only possible as part of a greater whole?

I wondered, if there was only one flower, atop the white plinth, would it still be right to call it an ‘individual’?

In this case, where the whole ‘set’ consists of just one entity, it would be inappropriate to claim that we were able to distinguish it from anything else.  – Because nothing else exists.  But if individuality requires that we are able to distinguish ourselves from other people (which most would hold), then it would follow, that individuality cannot exist in isolation. (These ideas have been discussed in a previous post – with relation to Leibniz and his Principle of Identity of Indiscerbibles. See: Understanding the House)

Thus, for the individual to exist – the collective is also necessary, but only if we focus on the subject – rather than the structuring principle.  I feel this is where De Rooij’s work failed, leaving me walking away feeling slightly perplexed.  The identification with the photograph’s ‘formal qualities’ destroy the very things he was setting out to represent – the individualised expression of rioting, protest, mourning and commemoration.  The exhibition would have been better off, with a single flower.

So, in answer to what makes me, me.

I would argue – that its not ‘me’ at all – its other people.  But don’t tell them that.

Willem de Rooij is showing at the Arnolfini, Bristol, until 8th February, 2015.  Entrance is free.