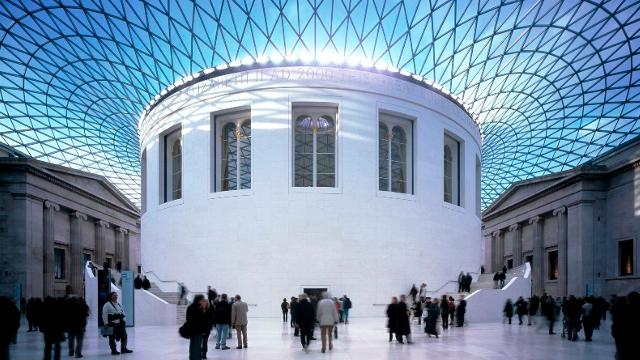 This was the title Count Christian Dürckheim, who donated almost all the works on display, would have preferred for the British Museum’s showcase of 90 examples of German, modernist art.  Eventually titled Germany Divided – A Search For Identity, the exhibition is more than a mere exploration into ‘modernism.’  Germany Divided represents a very particular moment in the 1960s and 1970s when German art, culture and self-identity were being reconstructed.  The Berlin Wall went up in 1961, and didn’t come down until 1990.  The six artists represented in this show were all from East Germany, but moved or escaped in one way or another to the West.  Their art is a process of change; a society progressing away from a terrible moment in history (most notably Nazism), but at the same time attempting to comprehend itself.  The German word for this is Vergangenheitsbewätigung, literally meaning ‘the attempt to come to terms with the past.’

But why is all ‘vanity’ and ‘vexation’?  For me at least, the art presented the viewer with a deep consideration of what it means to be human; not just German or European.  In a century devastated by two world wars, any faith in previous tradition and ideals was hard to defend, in fact it would have been vanity to do so.  An un-self-questioning recreation of past-order was simply not an option. Reconstruction began for people, as Günter Grass put it, ‘with brick and dust between their teeth’ amidst the literal and metaphorical ruins of Germany. These efforts were made harder, of course by a country which was occupied and ruled by the allies and then subsequently divided between the Capitalist West and the Soviet East.  It was not only ‘coming to terms with the past’ that was needed, but also ‘coming to terms with the present.’ The vexation, the aggravation and exasperation is plain to see in almost all the works on display.

What Divided Germany does make clear, is that binary dichotomies concerning the ‘Two Germanies’ are hard to form and potentially misleading.  As Thomas Lindenberger has highlighted in his discussion of ‘Germany as Border Region of the Cold War’, border areas are in fact zones of intense communication, separating polities territorially, but as zones they create the need for interaction and exchange.[1]  This process of communication is represented in the migrant sextet: Georg Baselitz (b.1938), Gerhard Richter (b.1932), A.R. Penck (b.1939), Markus Lüpertz (b.1941), Blinky Palermo (b.1943) and Sigmar Polke (b.1941).  The show is not focused on Germany’s World War history though – far from it.  The ambition of the British Museum and of Dürckheim was to inform the British public on German culture, a ‘corrective’ to common preconceptions. The public’s understanding of Germany has been ‘overshadowed by the narrative of world wars’, stated the director as he unveiled the show.   As a result of this, the British Museum has put on a series of events and lectures on German art and culture. 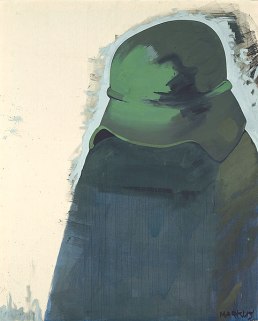 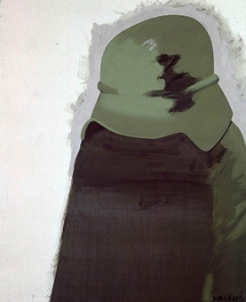 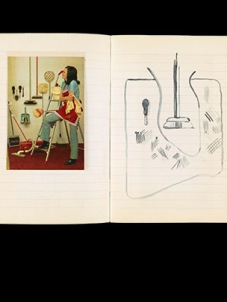 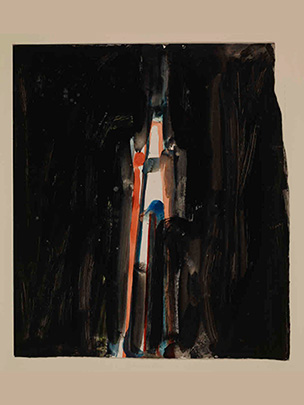 It is of course, impossible to deal individually with the ninety drawings on display here (as I feel they deserve – and well worth a visit in order to do this yourself!), but certain key themes can be brought out of the artist’s work.   Lüpertz is the most direct in his approach, criticising political life unswervingly, depicting war helmets with no heads beneath; a generation shattered by ideals of militarism, now faceless – without identity.  It is this search for identity which brings all the artists together.  Richter utilises a similar level of abstraction, evidencing a similar distrust of direct and supposedly ‘truthful’ representation.  This comes through in his blurred and slipping self-portraits, black dots shifting in the viewer’s gaze.  Polke contrastingly utilised satire to criticise the lauded ‘economic miracle’ of post-war West Germany.

I found A. R. Penck’s work the most poignant – lonely, primal and searching figures.  These Palaeolithic stick men predate the evils of the twentieth century, becoming broader symbols of contemporary man in this state of new beginnings.  Even though Baselitz is presented as the star, and forms the vast majority of the collection, his drawings spoke less to me than Penck’s striking, simpler images.  Having said this, with his sinuous, deliberate dark lines, Baselitz does successfully speak of trauma.  ‘A New Type’ is perhaps the most famous image, part of a series of expressive charcoal drawings of deformed, half formed human figures.  Like Penck, in a way, they are reminiscent of much older traditions; not quite Palaeolithic, but of sixteenth century chiaroscuro woodcuts (Baselitz himself had a fine collection of sixteenth century woodcuts). These traditions are fractured and most famously inverted though; the symbolic divides reflecting Baslitz’s own sense of disconnection.  The inverstion, a world turned on its head is his trademark, turning representation into abstraction; everything needs to be worked at, and analysed to be understood.

Admittedly, this show does not present itself easily to the viewer.  Perhaps fitting for its situation in the British Museum, it comes across more as archived historical documents; not grouped by theme, idea or artistic expression – but more by name and date.  It is more of a collection than an exhibition.  But for those willing to delve into the history, the artists meanings (a good amount of biographical, historical and interpretive information is given for each piece) – it is an incredibly informative and touching presentation.

Divided Germany is on at the British Museum until 31st August.

Do you have an article, review, or arts event that you would like featured on A – B – C?

[1] Thomas Lindenberger, Germany as  Border Region of the Cold War, in, Divided but not Disconnected:  German Experiences of the Cold War (New York; Oxford: 2010), pp. 11-33.