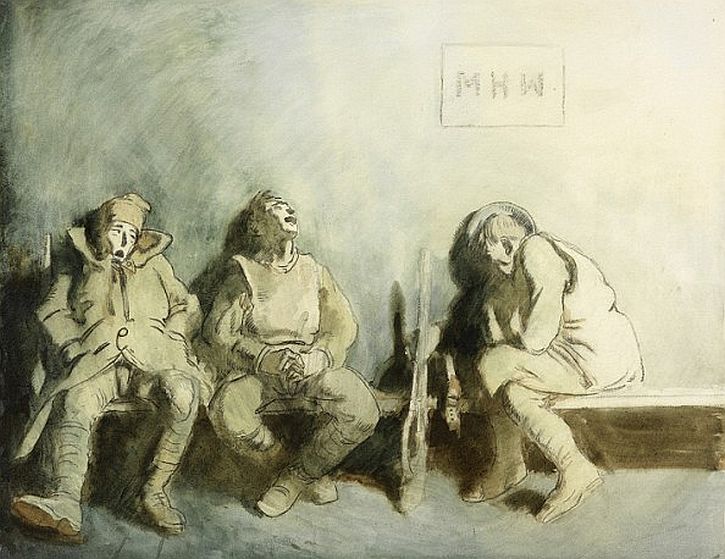 The Great War in Portraits: War at the National Portrait Gallery

Imagination, n.:  A warehouse of facts, with a poet and a liar in joint ownership.

Who should win?  The Poet or the Liar? Does it even matter, and are they always destined to be co-owners?

This exhibition revolves around contrasts and difficult questions.  It is an incredibly fitting portrayal of a war which 100 years on still causes controversy.  Its meanings are as of yet unfixed, and this collection of art, rather than help fuel unanalysed myths, presents the viewer with a set of contradictions; irreconcilable ideas to be explored.  It’s the contrasts themselves that are important – like almost all great art I can think of, it builds up dichotomies; not in order to reconcile them into one nice, neat whole – but to present them, in their own strange truthfulness.

The National Gallery chose to open the show with Epstein’s Rock Drill, a work which expressed the artists mounting horror at modern society and the conflict.  Fitting for this exhibition of vacillating meanings, the sculpture on display is a later Epstein version, radically changed and reconceptualised from its first creation.  By this point, Epstein had amputated the limbs, the sculptures mutilation reflecting a very real reality for combatants, as well as the war’s shattering psychological impact.  A foetus figure is placed at the heart of the machine, engulfed in the mechanical vision.  Here, in this introduction, a powerful sense of aggression gives way to even greater loss.

Such themes continue in this small but very well curated show.  The viewer is led through a series of rooms, each posing a new set of collocations.  Traditional oil-paintings of the European dynasts are presented next to historical documents, newspaper articles showing the friendship between King George and his Russian cousin Tsar Nicholas II, both attending Kaiser Wilhelm’s daughter’s wedding.  Such images of nationalistic and traditional values are then directly contrasted with ‘leaders and followers’, the generals and privates who followed them into battle.  The centre piece of the exhibition revolves around a photo wall of faces, all participants in the war – some famous, some not; all engulfed indiscriminately in the action.  This was the war of the Unknown Soldier; and it was very poignant to see this represented via portraiture.  In the images of General Haig and unidentified faces, a dichotomy is set up again; participants represented in an art form (portraiture), perfectly designed to celebrate the individual story – one traditionally of elites, in this case, turned on its head. 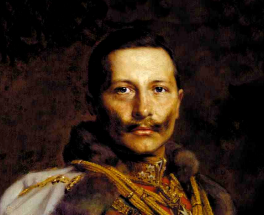 The harsh reality, the gap in the imagination between the official liar and the artistic poet – is evidenced when works such as Walter Sickert’s and William Orpens; valiant depictions of decorated heroes, are contrasted with that of Gilbert Rogers or Henry Tonks.  Gilbert Rogers The Dead Stretcher Bearer (1919) was censored by the war office, for its death represented with unflinching directness; again, the battle between artistic truth and authorised lies.  This opposition, between ‘the valiant and the damned’ continues in the next room of the exhibition, where ‘official’ patriotic euphoria was replaced for many with disillusionment and unbearable loss.  It is in this room, the penultimate section of the exhibition, that the tension between official positivity and those unwilling or unable to ignore the war’s consequences is evidenced.  These divergent paths are best represented in Tonk’s serene pastel works, depicting soldiers with gruesome facial disfigurements.  This sits opposite Orpen’s The Receiving Room (1917), a distinct change from his earlier style, depicting three soldiers injured and exhausted at a military hospital. 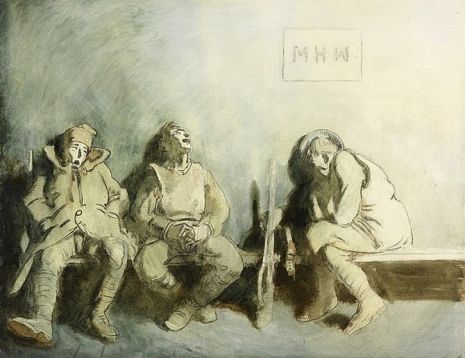 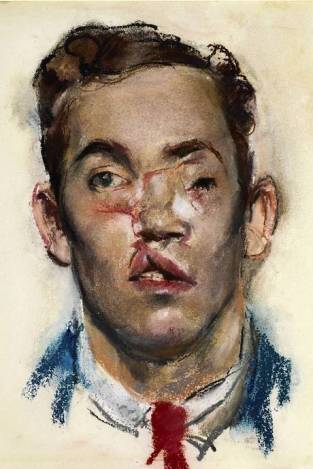 The heaviest burden of all is the pressure of the war and the increasing superficiality. It gives me incessantly the impression of a bloody carnival. I feel as though the outcome is in the air and everything is topsy-turvy… All the same, I keep on trying to get some order in my thoughts and to create a picture of the age out of confusion, which is after all my function. – Ernst Ludwig Kirchner.

The exhibition culminates (where it started) with ‘Tradition and the Avant-Garde’, artists responding to the bleak realisation that human nature itself had changed.  With modern methods of warfare; gas, barbed wire, flamethrowers and machine guns, compassion was seemingly snuffed out.  Whilst much of British art returned to a stable order, rejecting a brief modernist moment; German art was indelibly changed with the Expressionist movement – a direct response to the threatening modern world.  This is hauntingly realised in Ernst Ludwig Kirchner’s self-portrait as a soldier; a bright primitive and crude painting, countering the distortion and primitivism of evidenced in European Society.  Part of Die Brücke movement, Kirchner represented the end of an old age, the faith in tradition and ideology – replaced with the only thing one could be sure of; experience.  Although there is a profound lack of hope evidenced; there is some optimism in the darkening picture, something new has been made in the avant-garde act of creation.  Kirchner’s severed hand, mask like face and looming background figure attests to his mental scarring, but in the Christ-like imagery, he represents a corrupt civilization destroyed and reborn.

A painter paints the appearance of things, not their objective correctness, in fact he creates new appearances of things.

In a similar manner to Kirchner, though in an even more unsettling way, Max Beckmann’s Die Hölle: Der Nachhauseweg (Hell:  The Way Home) is a black and white lithograph with grotesque, disfigured faces.  They are portrayed in diametrically opposed fashion to Henry Tonk’s sympathetic pastels – though both giving a similar effect.  The artist himself is confronting these injured caricatures in a harsh, graphic and disturbing drawing – showing the turmoil which greeted most on their return from the front.

The exhibition, by contrasting German avant-garde expressionist work with the British artistic ‘return to tradition’ raises (yet more) questions about the unhealed divisions between societies, which existed long after the guns had ceased.  With the advent of Versailles, the Weimar Republic, the rise of Nazism and the Second World War; forces of destruction and nationalism were once more unleashed upon Europe, with even more devastating consequences.  The individuals represented in the exhibition, from royalty to the lowest ranks of the soldier tell the same story.  This story is the unceasing and ultimately futile drive for utopias; new, different and better paths for the world…  Poets and Liars are all equally part of the unfolding narrative…

The exhibition will stay until June 15th, for more information see:

For more information on the First World War itself, the British Library have an informative online resource:  Click Here.

7 thoughts on “The Great War in Portraits: War at the National Portrait Gallery”