Compton Verney, a beautiful stately home in the midst of the Warwickshire countryside, has been home – as of late – to two giants of modern sculpture:

In the Capability Brown landscape, the two sculptors sit side by side – evidencing the remarkable parallels, contradictions and dialogue between their works.  At first glimpse though, one may think they have little to say to each other.  How does the father of British abstract modernism (who was just nineteen years of age when Rodin died in 1917), speak to a traditionally schooled, mid-century French sculptor?

As it turns out, very easily.

Both men treat the human form with utmost precision and care, evidenced in their amazing draftsmanship (multiple drawings, montages, paintings and sketchbooks are on display) and attention to detail.  Both sculptors attempted to show ‘expression’, whether through the oversized and meticulously crafted hands, feet and muscles of Rodin, or the smooth – yet undulating figures of Moore.  In the end, both were humanists, emphasising both the integral value and agency of human beings.  This theme gave an ideal narrative to the exhibition, their care for the human form and person, on show at all times.

Compton Verney have managed to acquire a vast array of both sculptors’ works, in a mammoth exhibition displayed in the house’s grounds, as well as the indoor exhibition space.  The ‘Capability’ landscape was a perfect backdrop, mirroring the concerns of these two avant-garde sculptors.  His style of smooth, rolling grass, running straight to the house, only broken by scatterings of trees and serpentine lakes, was a fundamentally new style in English landscape.  It was (and is) a ‘gardenless’ form of landscape, which swept away almost all the remnants of formally patterned styles.  Rodin too, was accused of just this, clashing with the traditional French academic tradition of figural mythology – instead depicting his bodies with a celebrated realism, individual character and unavoidable physicality.

Moore was incredibly influenced by Rodin, yet in his exploration of figure (very often female, and very often mother-and-child), he took the older sculptor’s ‘realism’ and exploration of human individuality to the next level.  With a pure attention to mass and form, Moore induces a unique, deeply personal reaction in each viewer.  Where the two men part, is in the outward realism – differing ways of depicting the ‘universal.’  Moore felt that sculptures and drawings should never be ‘too explicit’, as this ‘takes away part of that mystery so that the spectator moves on to the next object, making no effort to ponder the meaning of what he has just seen.’  This failed (and rightly so) to dampen his admiration for Rodin however, which only grew with the passing of time. 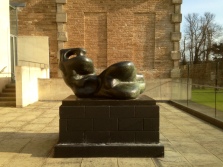 Seeing these two sculptors next to each other led to a better appreciation – more thinking, more feeling, more looking – of both.  Thoroughly recommended!

9 thoughts on “Moore and Rodin – Modern Sculpture at Compton Verney”