Manners and Modernity: Pictures of the Floating World

And now for something completely different…. currently displayed at the V&A is a selection of “manner posters” originally shown across Tokyo’s Seibu Railway network between 2016 and 2019. The small exhibition also includes original “ukiyo-e” prints, demonstrating the artistic influences that inspired the posters.

Ukiyo-e is a genre of Japanese art which proliferated during the 17th and 19th centuries – directly translating as “pictures of the floating world”. Some ukiyo-e artists specialised in making paintings but most made prints, with typical subjects including courtesans, kabuki actors, sumo wrestlers, history, folk tales, travel, flora, fauna, and erotica.

In the Ukiyo-e movement artists rarely carved their own woodblocks for printing. Instead production was divided between the artist, who designed the prints; the carver, who cut the woodblocks; the printer, who inked and pressed them; and the publisher, who financed, promoted, and distributed the works. There is a wonderful synergy between this ancient way of creating art and the modern business approach to design. The train posters themselves would have to go through various stages of briefing, design, creation, approval, technical printing – and of course financing!

These links continue not only in the collaborative methods of production, but in the artistic inspiration for the designs themselves. The Ukiyo-e school is best remembered for the work of two 19th century masters – Hokusai (whose Great Wave off Kanagawa is one of the most famous works of Japanese art) and Hiroshige (most noted for his series The Fifty-three Stations of the Tōkaidō). The influence of this latter series can be directly seen in the poster “Please consider others when moving bulky luggage”, first displayed in October 2017. The porters carrying luggage across various beautiful 19th century landscapes reappear pulling almost identical suitcases in the poster.

Following the deaths of Hokusai and Hiroshige, and against the technological and social modernisation that followed the Meiji Restoration of 1868, ukiyo-e production went into decline. It is ironic that another poster, which humorously chastises railway users to “not use smartphones while walking” also takes its influence from a classic 1820 Keisai Eisen print (The courtesan Hinaogi of the Daikoki House) – depicting a courtesan wearing a remarkably similar yellow headdress. 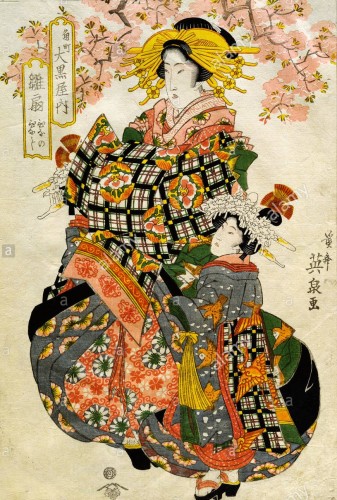 Early Ukiyo-e prints were monochromatic (such as those made by Moronobu in the 1670s), with colour coming in gradually – usually added by hand for special commissions. By the 1740s, multiple woodblocks were used to print areas of colour – with full-colour production only becoming standard in the 1760s with the success of Harunobu’s “brocade prints”. What is truly astounding about both later prints and the railway posters, is their sheer control and range of colour. An array of bright primaries are masterfully blended to form a harmonious composition. 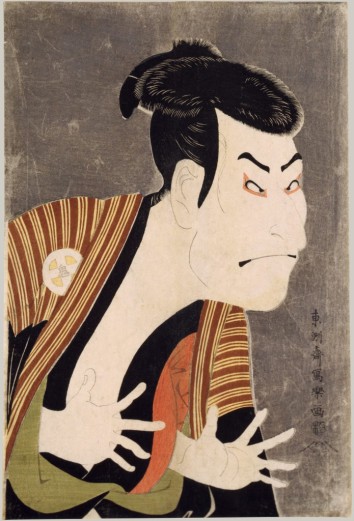 This is particularly evident in the poster “please do not rush onto trains” (March 2017), which took particular inspiration (in form rather than colour) from Toyohara Kunichika’s 1865 “Famous actors caught in an evening thunderstorm”. Portrayals of esteemed Kabuki actors such as those in this older tryptich were a central part of Ukiyo-e prints, and remain influential  to this day. Ukiyo-e itself was central to forming the West’s perception of Japan, with “Japonisme” becoming a strong influence on early Impressionists such as Degas, Mary Cassatt and Monet, as well as Post-Impressionists and Art Nouveau artists such as Van Gogh and Toulouse-Lautrec. 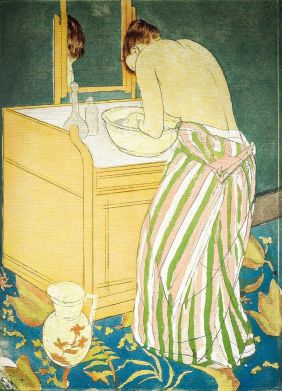 The 20th century saw a revival in Japanese printmaking: the shin-hanga (“new prints”) genre capitalised on the new international interest in Japanese culture, whilst the sōsaku-hanga (“creative prints”) movement promoted individualist works created by a single artist. Prints since the late 20th century (very much like the V&A’s posters) have continued in an individualist vein – ensuring these pictures of the floating world are firmly here to stay.

Manners and Modernity: Ukiyo-e and etiquette on the Seibu Railway is on until 22 March 2020. Entry is free. Find out more on the V&A website >

Amelia Carruthers is a writer, editor and tutor based in Chiswick, London. For more information on academic home tutoring, please visit: www.chiswicktutoring.com

2 thoughts on “Manners and Modernity: Pictures of the Floating World”