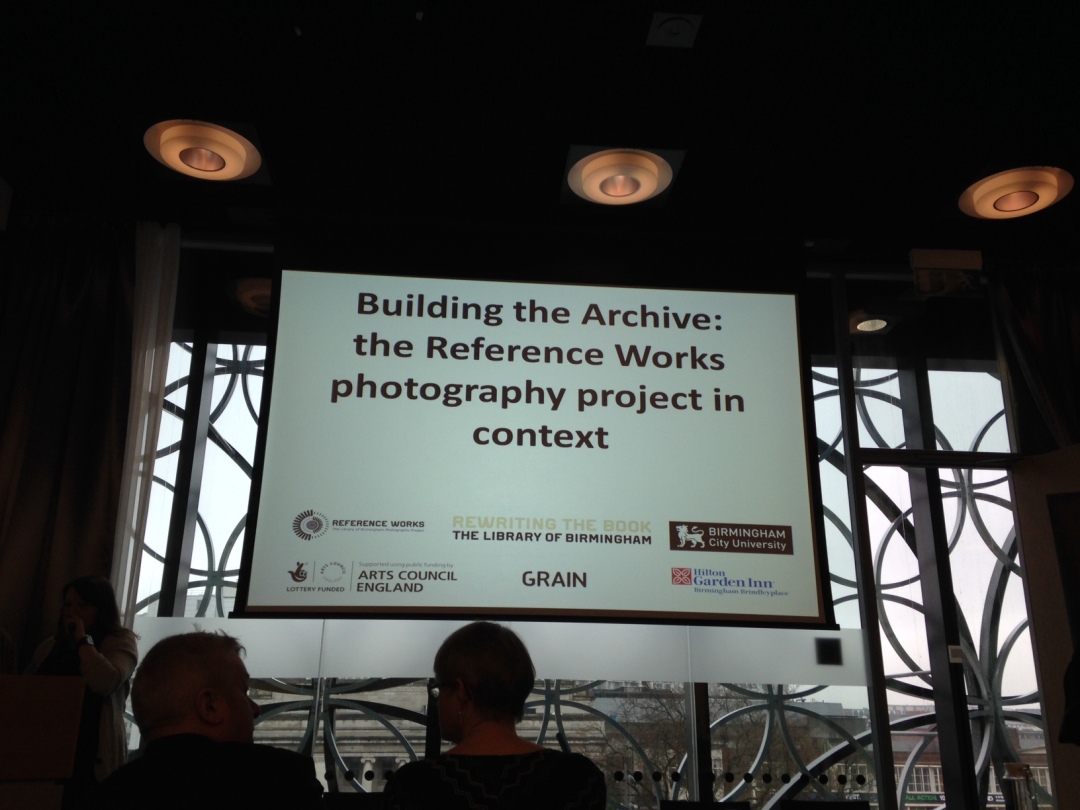 Building the Archive: An Archive of Our Own?

Here, in true Archival fashion, I wish to offer up a record of the ‘Building the Archive’ Symposium – a day, in response to Birmingham Library’s ‘Reference Works Photography Project’.   This was a set of commissioned photographic reactions to the transformation of Birmingham’s 1970s building, into its present, ‘modern’ form.   The photographs would, after public display, be stored as part of Birmingham’s 3.5 million photographic collection.  This was art about archives, in turn reciprocated by the archives containing, and enveloping the art itself.

Fittingly for the day’s topic, the meanings intended / taken from the individual speakers (or, more appropriately – now merely documents) did not fit together neatly, nor did a clear overarching narrative appear.  I did not feel it was an entirely successful, or entirely positive day – but nor did it suggest despair for our archival collections.  Appropriately, it offered up a diversity of viewpoints and approaches, some I agreed with, some I didn’t, on the relationship between public involvement, arts and archiving.

The day was intended to demonstrate the wide variety of ways in which people can inhabit, understand and use photography and the archive – and how these meanings then interact.  It was an attempt to think through this complex story.  Key questions included:  How does one stimulate the archival imagination?  How can we mobilise collections, make archives accessible and encourage public discussion and dialogue?

From 9am to 5pm, there was a constant succession of speeches, questions and discussions – providing a mass of information and ideas.   Consequently, this blog will come in instalments.  The morning session: Elizabeth Kirwan, Anne Braybon and Brian Griffin, will form the first section.  Part II will discuss artists Andrew Lacon and Stuart Whipps, whilst part III will tackle the afternoon’s conversation, chaired by Johnny Golding.

Elizabeth Kirwan, curator of the Irish National Photographic Archive (NPA) was first to speak.  She was glad to perform this role, as it forced her to reflect and step out of the daily institutional routine.  The NPA is a massive organisation, founded in 1877, it opened its doors in 1890 and today has over 60,000 annual visitors, contributing five million Euros to the local economy.  It holds over ten million items, ranging from photography’s Victorian beginnings to present day photo journalism.  All its collections relate to Ireland, and Irish life.

In light of these principles, Kirwan elaborated on the main problems that libraries and archives were facing.  These included the ‘transition to digital’, maintaining an outward focus and ensuring diversity of services and audience.  She argued that to solve these problems, one must be able to respond and learn from one’s ‘using community’ – connect with the space beyond the archive.

I felt these ‘problems’ should have been framed as ‘opportunities’.  Seeing such objectives as problems seems to highlight why so many archvies fail to create public dialogue and involvement, instead retreating further into themselves as institutions.  Moving records onto readily accessible digital mediums and connecting with the community should be incredibly exciting prospects, not hurdles to be overcome.  Such aspects, surely – should be an archives raison d’être.  Paradoxically, if one is employed to ‘store and keep’ knowledge, the reality of the role is to disseminate and spread.

Kirwan then spoke about one of the NPA’s attempts to fulfil its guiding principles; an artistic commission, to create new works responding to the archives current collections.  This had the ambitious goal of creating ‘contemporary witness to our society’ – the life and times of working-class Irish families.

This expressed desire, to record and document CURRENT life is a classic example of French historian, Pierre Nora’s ‘Lieux de Memoire’ (Places of Memory).[1]   This is the self-conscious attempt to preserve memory in historical ways; archives, museums, memorials and anniversaries; histories which need to be created, because in the modern day, spontaneous, social ‘remembering’ has largely ceased to function.  This is the rise of ‘history’ (Lieux de mémoire) as opposed to ‘lived memory’ (Milieux de mémoire).  Here, what Kirwan is attempting to do – represent current Irish society, purely to be archived, stored for future explorations, represents a decisive break with the past.  It will be a record, rather than a re-invocation, lacking the ‘lived experience’; the communal interaction with memory, frequently lacking in the archive environment. 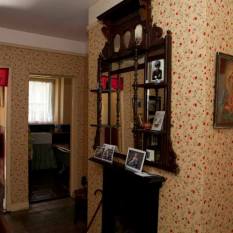 It did not though! I thought this commission might run the danger of ‘facing inwards’, merely responding to the archives pre-existing collections.  However, I was wrong.  Jeanette Lowe’s beautiful images of ‘Pearse House’; documents of Irish working class communities, really brought to life the lived-reality of the inhabitants.  Crucially, Lowe’s grandmother, Bridget (Birdy) Ashmore was one of the first residents in Pearse House, raising a large family, including Jeanette’s mother, Anne.    There was an integral family experience, which helped encourage other residents to get involved.  At the exhibition at the NPA, there was a wall, where viewers could put up (and take down as they pleased) their own memories of Pearse House.  The responses were incredibly touching, and aptly demonstrated ‘living memory’ – side stepping the irrelevance of Pierre Nora’s empty ‘Lieux de mémoire.’   This commission seemed to fulfil all of Kirwan’s principles – returning on investment, relevance and relationships.  The puzzle now (which sadly wasn’t addressed), is how to keep momentum going…

Brian Griffin and Anne Braybon led the second part of the morning; discussing their role in the National Portrait Gallery’s commission, ‘Road to 2012.’  This was a project designed to highlight the individuals who created London Olympic Games – those who made it possible.  Griffin was one of the photographers involved in the project, whist Braybon was the creative director.

Griffin and Braybon (similar to Kirwan) were agreed they wanted the work to have a ‘legacy value’.  This was photography designed for the archive, showing, for posterity, who and what was involved in the Games.  I am not entirely sure why though?  The photographs were displayed at the National Portrait Gallery, and are now in the public domain – a source of contemporary interest and documentation.  However, will they be of any use to future historians, ‘posterity’ and ‘legacy’?  Looking back, the most interesting sources are often those incidentally created, ‘propaganda’ has its place, but what it can tell us is limited.  The every-day experience, the actual stories of the ‘people’ who created the games are still left untold.

In a fascinating aspect of their talk, Braybon and Griffin bemoaned the fact that one of the portraits, a depiction of Sir Sebastian Coe was not allowed to be shown at the National Portrait Gallery, nor is it now in the public domain.  Why? Was again the big question.  Here, the interplay between artistic collections, archives and ‘big business’ partisan pressures come into play.  It is important to remember that such commissions, officially funded, are often highly political, with a strong normative aspect – choosing and selecting who should be remembered, and importantly how.

The finished portrait of Sebastian Coe portrayed him as a kneeling, small and dejected figure, represented as St. Sebastian sublimated. In hues of blues, blacks and pale greys, the sitter was depicted kneeling behind a desk, arms folded behind him, eyes focused elsewhere.  For me, Griffin’s discussion provided an interesting glimpse, not so much of the (frankly unsurprising) world of corporate commissioning and censorship – but into the working methods of the photographer himself. 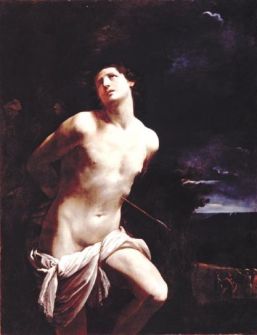 ‘Oh you’re so small!’  Griffin jovially reported his first words to Sebastian Coe – aiming to deflate his subject.  I presumed this was a ploy merely to create emotion in the sitter, to achieve a realistic, authentic shoot.  But why did Griffin automatically choose ‘deflation?’ There are many other emotions out there.  Here, again, political motivations come into play – the desired narrative of the photographer.   The language used continued in this vein, on seeing a beanbag underneath a small table, Griffin wanted to ‘Get him there’, it was all very controlling – again, ‘Get him’ in the corner.  In the end, somewhat ironically (following the St. Sebastian theme), Coe assumed the final position himself; arms bent behind his back, thoughtfully staring into the middle distance.  To some extent, this alluded to the role of luck in good photography; a combination of direction, influence and agency.

Braybon and Griffin described how they were ‘horrified’ at the ‘horrible process’, with the Olympic organisers refusing to let the picture of Sebastian Coe be shown.  ‘Over my dead body’ was one response – it was not triumphal, not positive enough.  Adding further levels of irony to the situation, now it was Braybon and Griffin who ‘felt so deflated.’    In true biblical tradition, events had come full circle, and the historical archive refused what it set out to create.

RISING FROM THE RUBBLE:  LACON AND WHIPPS

5 thoughts on “Building the Archive: An Archive of Our Own?”