Last Thursday saw the opening of ‘New Art West Midlands’ exhibition, showcasing new work from the best graduates across the area.  It was designed as a celebration of innovation, embracing the spectrum of artistic media and presentation, providing a platform for emerging, and recently graduated artists.  Themes of class, gender, identity, site-specific responses, urban spaces and the borders between landscape and language were all tackled.  There are far too many varied and diverse practitioners to discuss individually, so do visit; and see the rising talents of Birmingham’s art scene.

The show is held at three different sites, including Birmingham Museum and Art Gallery (BMAG), Barber Institute and Grand Union – running for different periods of time, ending variously from mid-March to May.

Along with Turning Point West Midlands (TPWM), Birmingham City University, Coventry University, Staffordshire University, University of Wolverhampton and the University of Worcester have been involved in the project.  It was great to see relationships formed between established artistic and cultural institutions (BMAG is one of the top three most visited attractions in the city), academic bodies and contemporary artists spaces such as Grand Union; providing a major boon to Birmingham’s art scene creating studio and exhibition space, as well as opportunities for emerging artists.  With the TPWM symposium still fresh in my mind, this is exactly the kind of activity – linking the individual and the institution, in a location-specific manner, which should be heartily encouraged.  (See previous post: http://ameliacarruthers.com/2014/02/04/make-share-mobilise/) 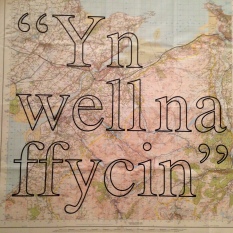 At this meeting, back at the start of February, it was stressed, that to have a meaningful, vigorous and integrated arts scene, it needs to be artists led – responding to the reality of life in a site specific manner.  For me, three exhibitors demonstrated such ideas perfectly: Ali Reed’s wall drawings and laser cut stacks responding to Birmingham Museum itself, referring to the architectural footprints and gallery layouts of the NWAM venues, Santhanha Nguyen’s (13) deeply personal response to abandoned, out-of-use areas; one of her favourite skating spots, also a notorious suicide spot atop a car park, and Gregory Dunn (‘Better than Sex’/ ‘Yn wekk ba ffycin’), who presented the viewer with rural ordinance survey maps bearing messages, blurring the boundaries between the environment itself and our enjoyment of it.  If, as it would seem, the ‘turning point’ in artistic scenes is connecting all the parts – linking centres of art creation, establishing new networks and spaces of discussion, this was nowhere better evidenced than in the participation of ‘Stryx’;  readily contributing to the carnival atmosphere of fresh, new, Birmingham arts.

‘Stryx’ is an artist led project, studios and exhibition space, very similar to Grand Union’s ethos, but based in the rooms below.  Not formally or officially linked, they hosted an exhibition of their own work, ‘Going round the Wreckin’, to coincide with NAWM – participating, discussing and making the evening’s art exploration all the richer.  Aly Grimes, one of the directors/artists, displayed a collaboration in progress – the responses which she had made, in reply to a Devonshire artist’s prompts, including ‘The Millenial Quarrel’ a musing on Jean Baudrillard, Iconoclasts and Simulacra and ‘Genesis’ responding to the specifity of her time travelling along the Devon coast.  The New Arts West Midlands show, in close collaboration with TPWM, Grand Union, Universities and BMAG, demonstrates the sort of discussion, cooperation and support to new, exciting and emerging artists that makes the Birmingham arts scene so animated.

One thought on “New Art in the West Midlands: Birmingham Museum and Art Gallery”