What is Hauntology? Art History at Halloween

As we approach officially the spookiest time of the year, I am putting a spotlight on one of my favourite terms in Art Theory – Hauntology. Aside from the wonderful name, Hauntology is a fascinating concept, with wide-ranging applications across philosophy, sociology, music, history, art history…. and just about any academic or cultural topic you can think of.

So, what exactly is Hauntology? 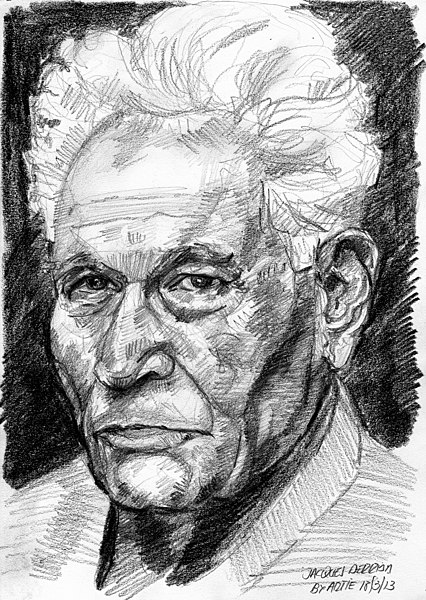 The term was first coined by Jacques Derrida in his book Spectres of Marx, to describe a sense in which contemporary culture is quite literally haunted by the “lost futures” of modernity. Have you ever yearned for what could have been? If so, you are in very good company. The concept refers to a collective contemplation of alternative possibilities – those which have failed to occur, or have been negated by our modern society.

Hauntology is a portmanteau of “haunting” and “ontology” (the branch of philosophy that deals with the nature of being/existence). In a similar way to Schrodinger’s un-dead Cat, Derrida discusses the way that society is constantly haunted by the “figure of the ghost [our past futures] as that which is neither present, nor absent, neither dead nor alive”. If we really try to look at our own identity and history, we are always dependent on our current set of linguistic rules… making the phantom of the past impossible to truly pin down.

Who was Jacques Derrida?

Jacques Derrida (1930-2004) was an Algerian-born French philosopher, known amongst many other things for his technique of deconstruction. This is a way of analysing the meaning of texts, particularly looking out for anything which goes against the grain. i.e. are there any parts that run counter to the intended meaning of a text? In this method of analysis, there is no out of context – or as Derrida phrased it: “Il n’y a pas de hors-texte”. The incidental is the imperative, and vice versa. The purpose of deconstruction is to demonstrate that language as a whole is inherently complex, unstable – and ultimately impossible.

Derrida actually referred to himself as a historian and aimed to question our traditional philosophical assumptions. He approached language and texts as constructed around binary oppositions, which all speech has to acknowledge if we want to make any sense at all. It’s like a less-optimistic version of the Hegelian Dialectic. If you think about it…. if everything was black, would “black” have the same meaning? We understand black-ness only through contrasting it with white-ness. In a similar way, if everything was always good – would good-ness even exist? We need the reality, or even just the possibility of “evil” for “good” to make sense. That’s the aim, anyway. 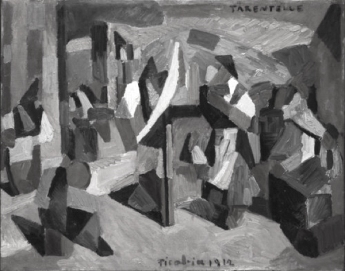 How is this relevant to art history?

In the 2000s, the term gained traction when it was used by critics such as Mark Fisher and Simon Reynolds to discuss the paradoxes found in modernity. It analyses contemporary culture’s persistent recycling of retro trends and fashions, and can be applied to art which looks at the “temporal disjunction” of hauntology – a nostalgia for lost futures.

Like Shakespeare’s Hamlet who bemoans that “time is out of joint” (a quotation discussed by Derrida), many artists have responded to the idea that things do not seem as they should be, that we can never fully access our own histories, nor for that matter our “always-already absent present.” Take for example Mimmo Rotella’s With a Smile (1962). The torn movie posters combine to form multiple, semi-comprehensible layers of text and language – giving a hint of the past “glory-days” of Italian cinema, its past possibilities haunting the disjointed present. 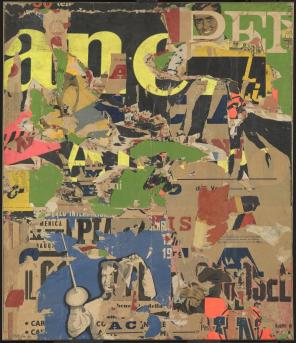 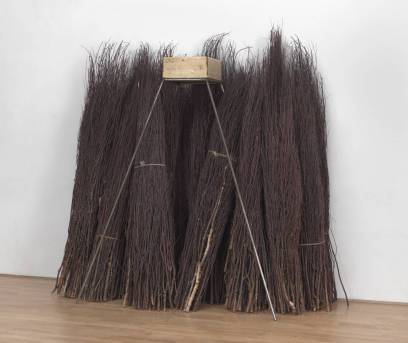 Collage, assemblage and mixed-media, with the opportunities for layering meanings and pre-formulated ideas are particularly relevant to this concept. As a member of the Italian Arte Povera movement, Mario Merz discussed his use of humble materials (twigs) in Lingotto (1968). He used such materials to highlight the difficulties of placing meanings and boundaries on art, stating that “they turn into sculpture, between the living and the dead, they are neither sculpture nor nonsculpture. They are both living and dead at once, they are exceedingly bizarre.” 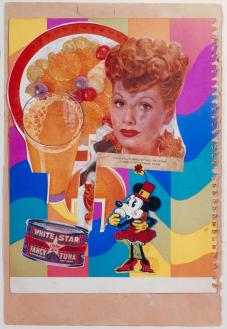 Eduardo Paolozzi, Meet the People (1948) – from Ten Collages from BUNK 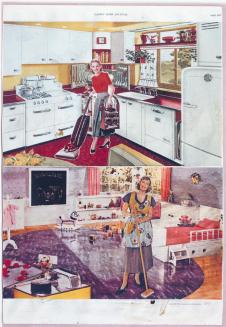 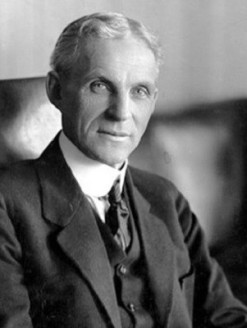 As a final example, Eduardo Paolozzi’s Meet the People (1948, part of Ten Collages from BUNK) is perhaps the most fitting example of art historical hauntology. These collages were mainly made from American magazines (given to him by US ex-servicemen), and show his fascination with American capitalist consumerism. The series refers to industrialist Henry Ford’s declaration that “History is more or less bunk…. We want to live in the present” – a perfect (though ultimately impossible) demonstration of Derridan Hauntology in practice!

Do you have any examples of Hauntology in practice – across literature, art, history or music? I’d love to hear your thoughts.